The treatments for improving the skin’s surface and thickness are a group of procedures known as ‘skin resurfacing’. This can traditionally be done by three well-known treatment modalities: deep chemical peels, dermabrasion and ablative lasers.1 While these treatments can deliver very good results, some patients are not keen to have them because they all are associated with the following issues:2,3,4

Recently, a new fractional ablative treatment modality using thermo-mechanical action (TMA) became available. The machine is a small device weighing about five kilograms that can be placed on a table top or transported in an airline hand carry-on bag. It is not a laser; hence, registration with the Care Quality Commission and annual maintenance contracts are not required. In this article, I shall detail the use of this device in a patient with severe photoageing and the results that were obtained.

TMA is a hot metal plate that is pushed momentarily, using a sophisticated and precise mechanical action, to heat the skin surface. The fractional effect of the treatment is achieved by small pyramidal shapes on the surface of the metal plate (Figure 1). During the treatment, only the tips of the pyramids touch the skin surface (Figure 2). It is designed to treat the skin fractionally with about 10% density. I believe the idea for inventing TMA came after Choi et al in 1999 published a study that suggested that when a CO2 laser hits the skin surface, it will heat the skin to around 400°C.5 Thus, in theory, if another treatment modality can heat the skin to a similar temperature, it could deliver the same results as the ablative CO2 laser. In 2012, Slatkine et al published an article on a device they invented that used small metal rods that were heated to 400°C to create a microthermal zones (MTZ), that histologically was like those made by a fractional CO2 laser.6 This device, which was the precursor to the Tixel, then went through an extensive redesign to make it safer and more efficient.

The Elman paper also looked at the histological effect of the TMA treatment with different treatment parameters. The researchers suggested that by varying the dwell time, depth of penetration and number of pulse stacking, the TMA device can deliver both ablative or non-

ablative treatments. When set at the lowest setting, Tixel has also been shown to be able to increase drug permeability to the skin.8

A 59-year-old patient had her first consultation with me in 2001 when she was 43 years old. She was a ‘sun worshipper’ and even at the age of 43 she already had advanced photodamage with static lines (Glogau9 stage 3) that is normally seen in patients 50 years of age and above (Figure 3). She was a single mother with two children and could not take time o work. Therefore, at that time, all the patient wanted was to correct her deep nasolabial folds (Figure 4) and have neurotoxin injections to her upper facial muscles. The treatments went well and since then she kept coming to see me regularly for similar treatments. I wanted to reduce the patient’s photodamaged skin condition further and encouraged her several times to have fractional CO2 laser treatments, but she was afraid of the treatment and could not afford the long downtime period that was needed. I lost contact with the patient in 2009 for a few years when she had to move to southern Spain due to her work.

We reconnected again in August 2016 when she moved back to South Wales and was planning for her wedding. However, the patient’s health had changed as she was diagnosed with rheumatoid arthritis and was receiving regular methotrexate injections and occasional oral corticosteroids. Her skin had deteriorated further due to both age and more sun exposure in Spain. I graded her skin then as severely photodamaged (Glogau stage 4) (Figure 5).

The patient’s treatment plan now had to consider the limitations set by the immunosuppressive treatment she was under and her severe photodamaged skin. I started treating her cautiously with neurotoxins to the glabellar and crow’s feet areas only, but not her frontalis muscles, as this might cause drooping to her brows. This went well, so I then started the patient on a course of laser peels to regularly and gently remove her upper epidermis. She had only one treatment and then decided that she needed something that could work quicker.

The patient came back again in October 2016 and we discussed the new Tixel treatment as an option for her. She liked this suggestion and decided to go ahead with the treatment. 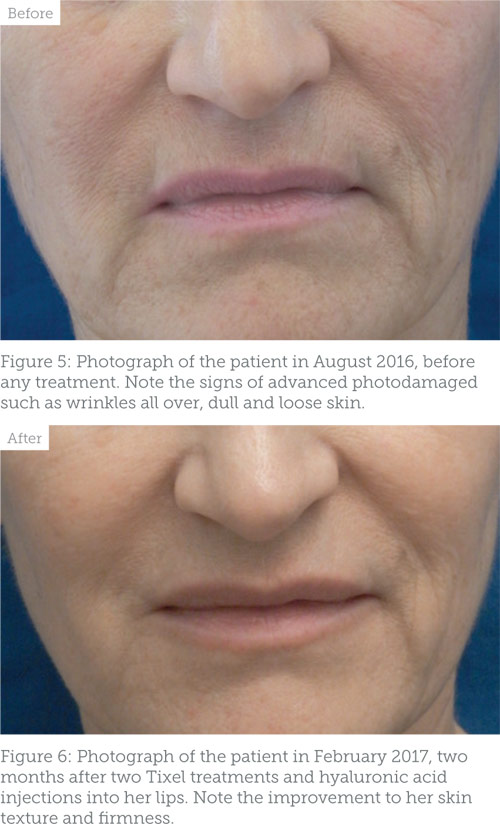 The patient had her first treatment on 9 November 2016 and the entire treatment only took 20 minutes to complete and the patient was very pleased when she saw the results a few weeks later. She told me that the downtime was short as she could put on makeup and go back to work

after only two days. The patient described the treatment as ‘very bearable’. She was not afraid and without hesitation had her second treatment on 7 December 2016. The treatment parameters for both of the procedures was 14 milliseconds dwell time, 700 micrometres protrusion and a single shot. I reviewed her on 1 February 2017 and she was extremely pleased with the outcome of the treatment. The patient had no complications despite her immunosuppressive treatments.

On examination, her skin had obvious improvement in texture, volume and wrinkle reduction. She still had static lines that can be corrected by dermal fillers, but overall, in my opinion, her skin health appearance had gone back to what she used to look like when I first met her 16 years ago (Figure 6). The only aftercare advice needed is to avoid sunlight and apply moisturiser for seven days.

Neurotoxins and dermal fillers are the foundations of all aesthetic medical practice. However, to be able to truly reverse the effect of photodamage and skin ageing, skin resurfacing treatment is often needed. Tixel is a new skin resurfacing device that has largely taken over from deep chemical peels and fractional CO2 laser in my practice. So far, I have been very impressed with the device; the results are pleasing to the patients and the side effects appear to be minimal.

Disclosure: Dr Harryono Judodihardjo is currently working with AZTEC Services Ltd to distribute Tixel in the UK and Ireland. 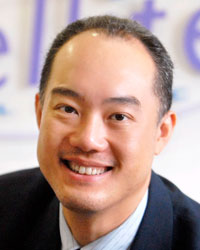 Dr Harryono Judodihardjo is the director of Cellite Clinic Limited in Cardi , winner of the Aesthetics Award 2016 for Best Clinic Wales. He is also a partner of

Belgravia Dermatology Ltd in London and the President Elect Designate for the Royal Society of Medicine Professional Aesthetic group.